For the love of dog’s

As most of you know I have a strong heart for animals. Especially two of my best 4
legged friends Deva and Buddha. Well here is how it all started.

I remember I was so excited to live on my own so I could get my own furry friend. Around my junior year of college I got a golden retriever Roxy. Oh the stories I have about this dog. She was full of energy and spunk. She was my best friend at time. Unfortunately I lost her in a car accident. It was very difficult on me and my family who had become close to her as well. A couple of rough months went by and I really missed that furry friend greeting me with excitement when I came through the door. I decided it was time to look for another dog.

Oh how I loved the golden retriever and would have to have another one. Golden retrievers have many great traits. There personality is happy and friendly. A Golden is the dog in the park that every child wants to come over and pet. They are loving and loyal. Golden’s have great positive energy that you can see in the wag of their tails. They are very smart and listen well. They talk with their eyes and follow with their nose. The things they know how to do best are love.

I was working in sales at the time when I came across a Vet clinic. I had to check it out, well plus I was selling them a slot in an advertising book. As I was waiting for the owner; I saw on the cork board golden retrievers for sale. Oh by that time no add was to be sold. I was on a mission to find my furry friend. I followed the directions to the dog breeder’s house out in the country. As I pulled up I saw the most beautiful dogs running around the farm. I asked to see the dog’s they had for sale. They introduced me to the mom and dad. The female was a blond and the male was very light too. Then the little puppies came around the corner and I was in heaven. I found my little girl and named her Deva. 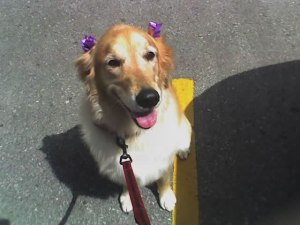 Deva took on her name well. Deva is very kind and gentle. She has blond fluffy hair. She wears a diamond collar around her neck, with much bling as possible on it. She sticks her nose up in the air at many dogs in the park, but will greet every single human she see’s. She is my buddy and best friend. 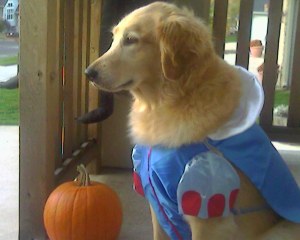 Having a dog is someone who will listen to everything you have to say. Sometimes if you change the tone or pitch of your voice they react as though they heard every single word. Deva loves to go on walks but is not into swimming just wading in the water. Deva is also very allergic to grass that is the Deva in her.

My now 11 year old Deva started to slow down on me just a little. I thought maybe all the skin allergy’s that we battled and medications were getting the best of her. So my husband and I decided we would get her a brother to have around the house to bug her.
This was one of the best decisions we made. We got a male golden retriever and named him Buddha. 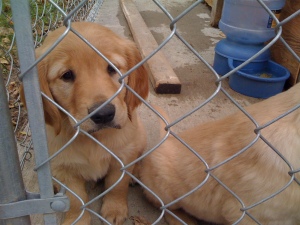 Buddha was the one of the largest in his litter. So that of course is where he got his name. Buddha has a totally different personality than Deva. Buddha is red in color and a big boy. He is move forward and loves to snuggle. 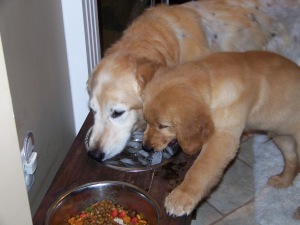 At first Deva didn’t know what to think of this little wild ball of joy in her house. Being the gentle dog that she is, she adapted quickly. After a while she thought he was alright.

Buddha brings out the playfulness in Deva. Basically we say, “He brought life back into her.” She play’s with him and loves him. Every once in a while she still likes her peace and quit. Deva has learned to get back in behind things to get out of his way. 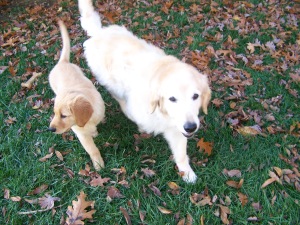 I would also say that Buddha found his buddy in Deva. He loves to bug her to play. He learned by following Deva’s every move. Every once in a while he get’s all snuggled in right next to her. They are best buds for sure. 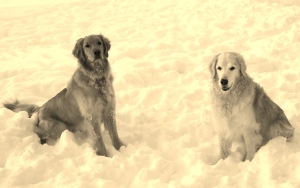 I don’t know how I could ever live with out my furry friends. I have a friend, workout partner, someone to boss around at times, play dress up, fetch a ball, and watch running in the fields. Nothing get’s better than the love of dog’s.

I love sharing idea's and hearing your thoughts. Hubby and I keep busy at home with our kiddos, chickens , dogs. We both enjoy the outdoors, so this year we developed a straw bale garden. We try and live green to the best we can. Oh one more thing. I love, love my techie toys.
View all posts by Shanna Banana →
This entry was posted in Doggies and tagged Buddha and Deva. Bookmark the permalink.

3 Responses to For the love of dog’s